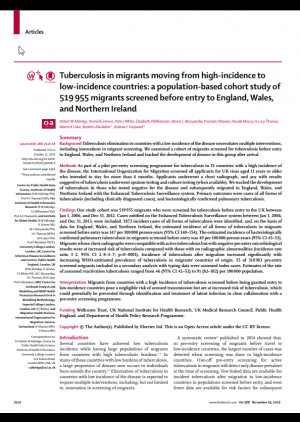 Tuberculosis in migrants moving from high-incidence to low-incidence countries: a population-based cohort study of 519 955 migrants screened before entry to England, Wales, and Northern Ireland

BACKGROUND: Tuberculosis elimination in countries with a low incidence of the disease necessitates multiple interventions, including innovations in migrant screening. We examined a cohort of migrants screened for tuberculosis before entry to England, Wales, and Northern Ireland and tracked the development of disease in this group after arrival.

METHODS: As part of a pilot pre-entry screening programme for tuberculosis in 15 countries with a high incidence of the disease, the International Organization for Migration screened all applicants for UK visas aged 11 years or older who intended to stay for more than 6 months. Applicants underwent a chest radiograph, and any with results suggestive of tuberculosis underwent sputum testing and culture testing (when available). We tracked the development of tuberculosis in those who tested negative for the disease and subsequently migrated to England, Wales, and Northern Ireland with the Enhanced Tuberculosis Surveillance system. Primary outcomes were cases of all forms of tuberculosis (including clinically diagnosed cases), and bacteriologically confirmed pulmonary tuberculosis.

INTERPRETATION: Migrants from countries with a high incidence of tuberculosis screened before being granted entry to low-incidence countries pose a negligible risk of onward transmission but are at increased risk of tuberculosis, which could potentially be prevented through identification and treatment of latent infection in close collaboration with a pre-entry screening programme.