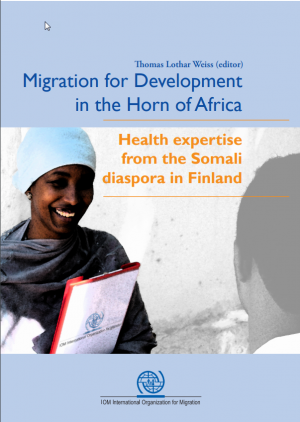 Migration for Development in the Horn of Africa: Health Expertise from the Somali Diaspora in Finland

Chapter 3 - The Somali crisis and Finland’s development approach to Somalia, analyses the specific context of the on-going Somali crisis situation that, since the early 1990’s, has provoked the mass emigration of Somalis. It examines the development policy approach of Finland, as a host country to an important Somali diaspora. BRONS’ contribution gives an overview of the political developments in Somalia over the last two decades. In her contribution, HELLMAN-FIELD explains the genesis and different expressions of Finland’s humanitarian and development aid response to the Somali crisis. PIRKKALAINEN examines the vibrant Somali diaspora associations in Finland and positions their work within the framework of Finnish Ministry for Foreign Affairsfunded efforts to favour co-development through the diaspora.

Chapter 4 - Challenges and Benefits of Mobility in the Somali Context, revolves around the characteristics of Somali migration and its multiple consequences. DAVID and JAMA GHEDI reconstruct the successive migration waves Somalia has witnessed since the 19th century as well as their impact on the Somali workforce at home and abroad. The following contributions describe in detail the situation of the Somali health sector. Through two assessment mission reports from 2008 and 2009, IOM HARGEISA dresses a dire picture of the devastated health infrastructure and human resources in the Somaliland region. TIILIKAINEN reminds us of a less visible but nevertheless important “folk medicine” in the Somali health sector which, as a result of the continued brain drain of health professionals, remains particularly important.

Chapter 5 - Reinforcing Somalia’s Health Sector, is dedicated to the Finland-driven efforts to rehabilitate the health sector in Somalia. Two major co-development initiatives, IOM’s MIDA Health project for Somalis from the Finnish diaspora and the work of Finnish Civil Society Organizations in Somalia’s health sector, are presented here. VAN TREECK and REYES retrace the history of IOM’s first MIDA Health project for Somalia before describing its implementation and the multiple challenges and lessons learned of this pilot project. SHEIKH ALI and GIANNINI dress an inventory of what has worked well in the project from the Somali perspective, and what remains to be improved. Interviews with three MIDA Health Somaliland-Puntland voluntary experts, and testimonies from representatives of two of the beneficiary institutions hosting health professionals from the Somali diaspora as well as the Somaliland Ministry of Health and Labour complete the picture. GRANT and BRANDER’s contribution bears witness to the historic efforts of Finland’s civil society organisations contributing to the reconstruction of the Somali health sector.

The Chapter 6 - Conclusion is a reminder that MIDA Health Somaliland-Puntland is a vital contribution towards closing the gap between migration and development policy and practice. WEISS underlines that the empowerment through MIDA of Somali health professionals from the Finnish diaspora as actors of change has shown positive effects on development back home. By supporting this empowerment, Finland through its Ministry for Foreign Affairs is sending out a message of hope for Somalia.