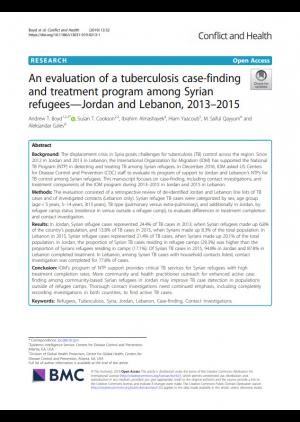 An evaluation of a tuberculosis case-finding and treatment program among Syrian refugees—Jordan and Lebanon, 2013–2015

Background: The displacement crisis in Syria poses challenges for tuberculosis (TB) control across the region. Since 2012 in Jordan and 2013 in Lebanon, the International Organization for Migration (IOM) has supported the National TB Program (NTP) in detecting and treating TB among Syrian refugees. In December 2016, IOM asked US Centers for Disease Control and Prevention (CDC) staff to evaluate its program of support to Jordan and Lebanon’s NTPs for TB control among Syrian refugees. This manuscript focuses on case-finding, including contact investigations, and treatment components of the IOM program during 2013–2015 in Jordan and 2015 in Lebanon.

Methods: The evaluation consisted of a retrospective review of de-identified Jordan and Lebanon line lists of TB cases and of investigated contacts (Lebanon only). Syrian refugee TB cases were categorized by sex, age group (age < 5 years, 5–14 years, ≥15 years), TB type (pulmonary versus extra-pulmonary), and additionally in Jordan, by
refugee camp status (residence in versus outside a refugee camp), to evaluate differences in treatment completion and contact investigation.