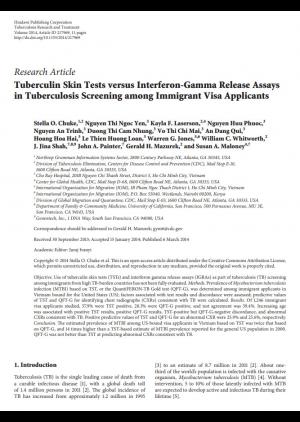 Objective: Use of tuberculin skin tests (TSTs) and interferon gamma release assays (IGRAs) as part of tuberculosis (TB) screening among immigrants from high TB-burden countries has not been fully evaluated.

Methods: Prevalence of Mycobacterium tuberculosis infection (MTBI) based on TST, or the QuantiFERON-TB Gold test (QFT-G), was determined among immigrant applicants in Vietnam bound for the United States (US); factors associated with test results and discordance were assessed; predictive values of TST and QFT-G for identifying chest radiographs (CXRs) consistent with TB were calculated.

Results: Of 1,246 immigrant visa applicants studied, 57.9% were TST positive, 28.3% were QFT-G positive, and test agreement was 59.4%. Increasing age was associated with positive TST results, positive QFT-G results, TST-positive but QFT-G-negative discordance, and abnormal CXRs consistent with TB. Positive predictive values of TST and QFT-G for an abnormal CXR were 25.9% and 25.6%, respectively.

Conclusion: The estimated prevalence of MTBI among US-bound visa applicants in Vietnam based on TST was twice that based on QFT-G, and 14 times higher than a TST-based estimate of MTBI prevalence reported for the general US population in 2000. QFT-G was not better than TST at predicting abnormal CXRs consistent with TB.