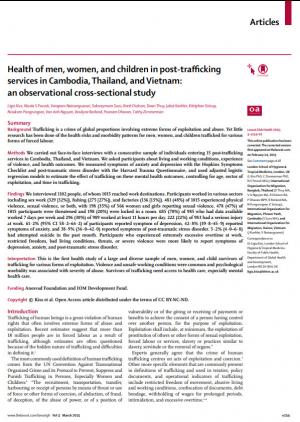 Health of men, women, and children in post-trafficking services in Cambodia, Thailand, and Vietnam: an observational cross-sectional study

Background: Trafficking is a crime of global proportions involving extreme forms of exploitation and abuse. Yet little research has been done of the health risks and morbidity patterns for men, women, and children trafficked for various forms of forced labour.

Methods: We carried out face-to-face interviews with a consecutive sample of individuals entering 15 post-trafficking services in Cambodia, Thailand, and Vietnam. We asked participants about living and working conditions, experience of violence, and health outcomes. We measured symptoms of anxiety and depression with the Hopkins Symptoms Checklist and post-traumatic stress disorder with the Harvard Trauma Questionnaire and used adjusted logistic regression models to estimate the effect of trafficking on these mental health outcomes, controlling for age, sector of exploitation, and time in trafficking.