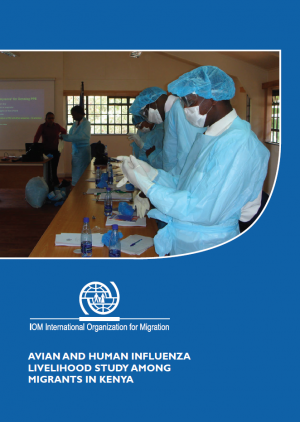 Avian and human influenza livelihood study among migrants in Kenya

Background: This study sought to assess the impact of an avian influenza alert or outbreak on livelihood and food security among poultry and poultry products’ transporters, traders and handlers in Kenya. This was done through mapping out migrant populations involved in poultry, identifying the knowledge, practices and existing gaps, and assessing business income from poultry. The study also addressed alternative income-generating activities and coping mechanisms available to the study population in case of an Avian and Human Influenza alert or outbreak.

Study methods: Review of literature identified gaps in policy and related studies. The field work was carried out in the Nairobi area, where 119 respondents were interviewed, and in Turkana District, where 51 respondents took part in key-informant interviews. Focus group discussions and a questionnaire were also utilized in the study.

Key findings: The results of the study indicate that despite limited poultry trade in Turkana, the poultry and poultry products’ business is increasing in importance, especially in the main towns of Lodwar, Kakuma and Lokichogio. Most of the poultry and poultry products are transported from West Pokot and Trans-Nzoia districts, over distances ranging from 200 to 400 kilometres. In Nairobi, poultry trade is high, with poultry and poultry products being brought in from Kitui, Kiambu and Makuyu, but also from as far as Sotik and Makindu. The study found that most poultry dealers in the Nairobi area and Turkana have heard of Avian Influenza (AI), with most of the dealers in Turkana having had AI awareness, prevention and control explained to them by a medical or livestock professional. In Nairobi, the training levels were much lower, with only 30 per cent of the dealers having received any AI training. We associated this difference with the high number of dealers and poultry in the Nairobi area relative to Turkana. Unsurprisingly, about 50 per cent of Nairobi poultry dealers reported not having put in place any measures to protect themselves from AI. In Turkana, the traders and handlers indicated they had all taken measures to protect themselves.

The study further showed that livestock movement directives, as stipulated in various veterinary service acts, are openly flouted in the case of poultry. For instance, humans and poultry are transported in the same vehicles, without any sanitation measures taken to separate the two. However, there has been some improvement since the 2005 Avian Influenza scare. Poultry contributes considerably to food security and livelihoods, and millions of Kenyans are involved in this economic activity across the country. Moreover, most poultry traders and handlers in Nairobi rely on poultry as their main source of income. Monthly poultry earnings range from an average KES 2,700 from transportation of live birds, to KES 8,000 from handling, to KES 38,000 from trade. Egg businesses earn KES 6,600 from transportation and KES 19,000 from trade on average. Average monthly earnings in Turkana are KES 13,000 for transport of live birds and KES 12,000 for egg sales. An Avian Influenza poultry ban or alert would therefore severely impact the livelihoods of most poultry dealers in Nairobi and surrounding areas. However, the impact would  be less severe in Turkana, where poultry businesses is much lower and is often combined with other economic activities.  Despite the 2005 Avian Influenza alert, most poultry dealers have not considered alternative livelihoods, for a variety of reasons. Over 40 per cent of  Turkana respondents and 50 per cent of Nairobi respondents have secondary schooling. The poultry dealers are mainly 26-35 years (50%) and largely male (72%). Approximately 20 per cent of the Nairobi traders are members of  various poultry business associations, while 10 per cent of the transporters have obtained business credit from commercial banks or farmer/trader associations.