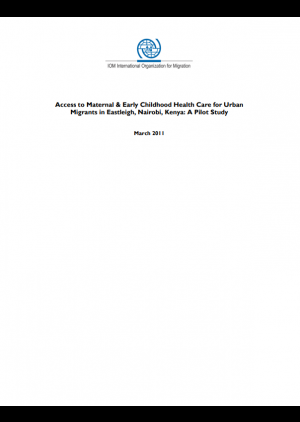 Executive Summary
Background : The international community has identified migrant health as a priority area. There is increasing evidence that migrant communities access and use health care services differently than do host populations and that migration status is associated with compromised access to healthcare. The health of urban migrants in Nairobi is a particularly important issue, as it is estimated that 500 new migrants arrive in the Eastleigh area of Nairobi each week. The Migration Health Division of the International Organization for Migration in Nairobi, is committed to identifying migrant health programming gaps and priorities, with a focus on maternal and early childhood health. This pilot project was conducted to refine and test the study protocol, to inform a larger study to take place in the near future. It is the result of a partnership between the School of Nursing, McGill University in Montreal, Canada, the IOM Migration Health Department in Nairobi, Kenya, and the Clinical Epidemiology Unit at the University of Nairobi, Kenya.

Results: In this pilot study, the need for a larger study w as confirm ed. Quantitative pilot results show ed that significant differences in health care access exist between migrant and Kenyan w om en. Most notable are differences in antenatal care, labour and delivery, contraception and breastfeeding. Qualitatively, despite a general consensus on the importance of accessing maternal-child health care, participants cited numerous barriers, especially cost, language barriers and religious beliefs. H ow ever, the larger study is necessary to confirm these results.

Conclusions and Recommendations: This pilot study was able to refine and test the study protocol for a larger IOM study to take place in Eastleigh in the near future. Recommendations for the larger study include: including all areas of Eastleigh in the quantitative sample to ensure that results can be generalized; improving qualitative sampling by developing m ore w ell-defined criteria; emphasizing the in-depth interview during interview er training; initiating com m unity mobilization at least two weeks prior to data collection; selecting a greater number of m ore comprehensive health service indicators and health outcomes for data collection and conducting logistic regression with respect to migration status during data analysis. Finally, continued involvement of IOM in providing health services in Eastleigh will maintain a strong connection with the com m unity, perhaps IOM’s greatest strength.

This pilot projet is the result of a partnership between School of Nursing, McGill University in Montreal, Canada, the IOM Migration Health in Nairobi, Kenya , and the Clinical Epidemiology Unit at the University of Nairobi, Kenaya. Ut was conducted between September and December 2010.
Region/Country (by coverage)
East Africa
Kenya
East Africa
Publisher
IOM
Project Type
Health promotion and assistance for migrants