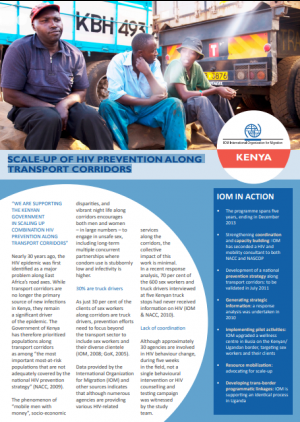 Nearly 30 years ago, the HIV epidemic was first identified as a major problem along East Africa’s road axes. While transport corridors are no longer the primary source of new infections in Kenya, they remain a significant driver of the epidemic. The Government of Kenya has therefore prioritized populations along transport corridors as among “the most important most-at-risk populations that are not adequately covered by the national HIV prevention strategy” (NACC, 2009). The phenomenon of “mobile men with money”, socio-economic disparities, and vibrant night life along corridors encourages both men and women – in large numbers – to engage in unsafe sex, including long-term multiple concurrent partnerships where condom use is stubbornly low and infectivity is higher.

IOM advocates for a three-pronged combination prevention approach, including, 1) clinical services that meet the specific needs of both vulnerable men and women; 2) strengthening messaging and intensifying behaviour change communication, and; 3) addressing priority structural issues, such as making quality condoms available. Clear consensus among stakeholders is required in terms of general approach, as well as on setting simple, bold, and achievable prevention objectives, such as promoting 100 per cent knowledge of HIV status (GFATM, 2008). Through an inclusive process, IOM is assisting NACC and NASCOP to facilitate the development of a national HIV prevention strategy along transport corridors that will be validated by all stakeholders in 2011. A minimum package will be developed including targeted behaviour change communication, male and female friendly minimum clinical packages, priority structural interventions, for example condom and lubricant promotion, quality assurance, and capacity building. This process will facilitate gap identification and eventual resource mobilization.