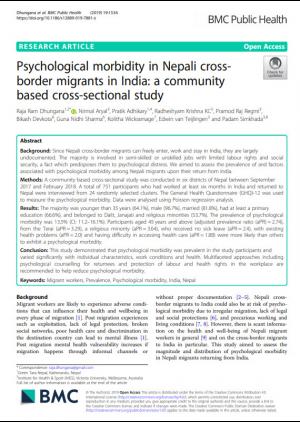 Psychological morbidity in Nepali cross-border migrants in India: a community based cross-sectional study

BACKGROUND: Since Nepali cross-border migrants can freely enter, work and stay in India, they are largely undocumented. The majority is involved in semi-skilled or unskilled jobs with limited labour rights and social security, a fact which predisposes them to psychological distress. We aimed to assess the prevalence of and factors associated with psychological morbidity among Nepali migrants upon their return from India.

METHODS: A community-based cross-sectional study was conducted in six districts of Nepal between September 2017 and February 2018. A total of 751 participants who had worked at least six months in India and returned to Nepal were interviewed from 24 randomly selected clusters. The General Health Questionnaire (GHQ)-12 was used to measure the psychological morbidity. Data were analysed using Poisson regression analysis.