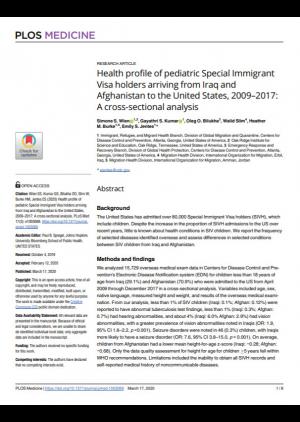 Health profile of pediatric Special Immigrant Visa holders arriving from Iraq and Afghanistan to the United States, 2009–2017: A cross-sectional analysis

Background
The United States has admitted over 80,000 Special Immigrant Visa holders (SIVH), which include children. Despite the increase in the proportion of SIVH admissions to the US over recent years, little is known about health conditions in SIV children. We report the frequency of selected diseases identified overseas and assess differences in selected conditions between SIV children from Iraq and Afghanistan.

Methods and findings
We analyzed 15,729 overseas medical exam data in Centers for Disease Control and Prevention’s Electronic Disease Notification system (EDN) for children less than 18 years of age from Iraq (29.1%) and Afghanistan (70.9%) who were admitted to the US from April 2009 through December 2017 in a cross-sectional analysis. Variables included age, sex, native language, measured height and weight, and results of the overseas medical examination. From our analysis, less than 1% of SIV children (Iraqi: 0.1%; Afghan: 0.12%) were reported to have abnormal tuberculosis test findings, less than 1% (Iraqi: 0.3%; Afghan: 0.7%) had hearing abnormalities, and about 4% (Iraqi: 6.0% Afghan: 2.9%) had vision abnormalities, with a greater prevalence of vision abnormalities noted in Iraqis (OR: 1.9, 95% CI 1.6–2.2, p <0.001). Seizure disorders were noted in 46 (0.3%) children, with Iraqis more likely to have a seizure disorder (OR: 7.6, 95% CI 3.8–15.0, p < 0.001). On average, children from Afghanistan had a lower mean height-for-age z-score (Iraqi: −0.28; Afghan: −0.68). Only the data quality assessment for height for age for children ≥5 years fell within WHO recommendations. Limitations included the inability to obtain all SIVH records and self-reported medical history of noncommunicable diseases.

Conclusion
In this investigation, we found that less than 1% of SIV children were reported to have abnormal tuberculosis test findings and 4% of SIV children had reported vision abnormalities. Domestic providers caring for SIVH should follow the US Centers for Disease Control and Prevention (CDC) Guidelines for the US Domestic Medical Examination for Newly Arriving Refugees, including an evaluation for malnutrition. Measurement techniques and anthropometric equipment used in panel site clinics should be assessed, and additional training in measurement techniques should be considered. Future analyses could further explore the health of SIV children after resettlement in the US.