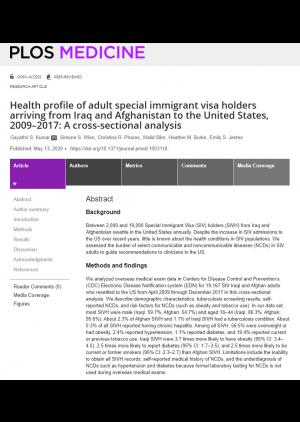 Health profile of adult special immigrant visa holders arriving from Iraq and Afghanistan to the United States, 2009–2017: A cross-sectional analysis

Background
Between 2,000 and 19,000 Special Immigrant Visa (SIV) holders (SIVH) from Iraq and Afghanistan resettle in the United States annually. Despite the increase in SIV admissions to the US over recent years, little is known about the health conditions in SIV populations. We assessed the burden of select communicable and noncommunicable diseases (NCDs) in SIV adults to guide recommendations to clinicians in the US.

Methods and findings
We analyzed overseas medical exam data in Centers for Disease Control and Prevention’s (CDC) Electronic Disease Notification system (EDN) for 19,167 SIV Iraqi and Afghan adults who resettled to the US from April 2009 through December 2017 in this cross-sectional analysis. We describe demographic characteristics, tuberculosis screening results, self-reported NCDs, and risk factors for NCDs (such as obesity and tobacco use). In our data set, most SIVH were male (Iraqi: 59.7%; Afghan: 54.7%) and aged 18–44 (Iraqi: 86.3%; Afghan: 95.6%). About 2.3% of Afghan SIVH and 1.1% of Iraqi SIVH had a tuberculosis condition. About 0.3% of all SIVH reported having chronic hepatitis. Among all SIVH, 56.5% were overweight or had obesity, 2.4% reported hypertension, 1.1% reported diabetes, and 19.4% reported current or previous tobacco use. Iraqi SIVH were 3.7 times more likely to have obesity (95% CI: 3.4–4.0), 2.5 times more likely to report diabetes (95% CI: 1.7–3.5), and 2.5 times more likely to be current or former smokers (95% CI: 2.3–2.7) than Afghan SIVH. Limitations include the inability to obtain all SIVH records, self-reported medical history of NCDs, and the underdiagnosis of NCDs such as hypertension and diabetes because formal laboratory testing for NCDs is not used during overseas medical exams.

Conclusion
In this analysis, we found that 56.5% of all SIVH were overweight or had obesity, 2.4% reported hypertension, 1.1% reported diabetes, and 19.4% reported current or previous tobacco use. In general, Iraqi SIVH were more likely to have obesity, diabetes, and be current or former smokers than Afghan SIVH. State public health agencies and clinicians doing domestic screening examinations of SIVH should consider screening for obesity—as per the CDC’s Guidelines for the US Domestic Medical Examination for Newly Arriving Refugees—and smoking and, if appropriate, referral to weight management and smoking cessation services. US clinicians can consider screening for other NCDs at the domestic screening examination. Future studies can explore the health profile of SIV populations, including the prevalence of mental health conditions, after integration into the US.