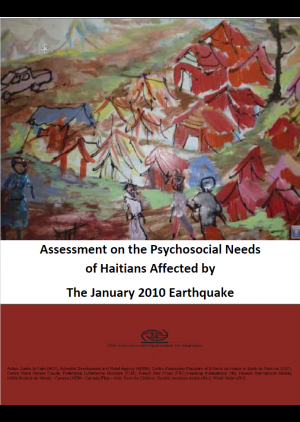 The 12 January earthquake which struck the Haitian coast, followed by several other aftershocks, has greatly damaged various cities in Haiti. At the end of August 2010, the government and humanitarian community estimated that over 2 million people had been affected, 222,570 individuals died, with an estimated 80,000 corpses still missing; 188,383 houses were destroyed or partially damaged, and 1.5 million persons were still displaced in 1,368 settlement sites (OCHA-Humanitarian Bullettin, 30th July 2010). Most of these families are still living in tents or self-made shelters constructed from tarpaulin and wood. Service delivery to these sites remains limited with the majority of efforts focused on addressing immediate needs in camps.

9,000 individuals only, identified as being at high risk of dangerous flooding, have been relocated to the only land identified by the government by the end of September 2010, while some land owners and schools have started evicting the displaced. Surveys have indicated that whilst some 40% of homes remain intact, many people are unwilling to return to their home or property due to both fear of another earthquake, and the fear of loosing the services currently provided in the camps (UNOPS- Safe Shelter Strategy, 14Th April, 2010). Agencies working within the humanitarian cluster tasked with Shelter construction have provided 6,868 transitional shelters to more than 34,000 individuals up to September 2010 (OCHA Humanitarian Bulletin, 30 July 2010). The Government of Haiti is encouraging IDPs to return to their homes, but these efforts have so far yielded few results.

The Assessment on Psychosocial Needs of Haitian affected by the 12th January earthquake was conducted between May 2010 and August 2010. This assessment aims at analyzing the interconnectedness of emotional, social and cultural anthropological needs among the earthquake survivors in Haiti, and look at their interrelation at the individual, family, group and community levels, in order to provide viable information in the devising of multidisciplinary, multilayered psychosocial programs. The assessment uses the Rapid Appraisal Procedures consistent with former IOM assessments.

Based on the Haitian cultural and anthropological considerations and the practical difficulty to interview individuals in camps without several members of the family participating, the current assessment was designed to be conducted in a family setting, allowing collective responses. Additionally the level of distress was not analyzed individually, but focusing on the recurrence of certain indicators across members of the families, with the ultimate intention to assess the wellbeing of neighborhood and its social and emotional determinants and not individual pathologies.