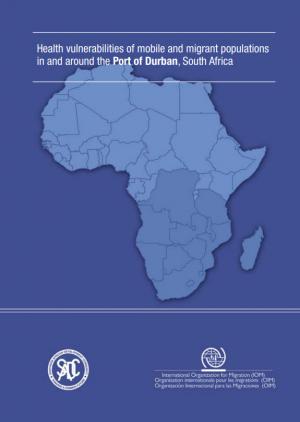 Health vulnerabilities of mobile and migrant populations in and around the Port of Durban, South Africa

Download this Publication
Description
This report assesses findings of the Durban study commissioned by the IOM with particular reference to the socio-geographical concept of ‘spaces of vulnerability’ amongst stevedores, truck drivers, seafarers and commercial sex workers. The concept refers to the social and economic conditions of existence and the personal circumstances of individuals, which can affect negatively their welfare and behavioural decisions.
The report draws attention to the marginalisation of the study populations in Durban as being due in part to urban development programmes and transformation of the maritime industry. Together, these processes are creating more rigid boundaries between the port and the city and pushing away, whilst also reducing the spaces where sexual interactions between mobile and migrant populations occur. Geographically, the effect is to create fragmented ‘pockets’ in the port environs and increasingly, further afield within the Durban metropole, where the mobile and migrant populations are vulnerable in terms of the risks to health arising from the nature of the sexual relationships amongst and between them. Socio-geographically, the report highlights that the spaces of vulnerability are transient, virtual spaces in reference to the psycho-social dimensions of vulnerability; for example ‘risky’ sexual behaviour despite sound knowledge and awareness of the threat to personal health and subliminal fears and prejudices - stemming from conditions of existence and personal circumstances - which contribute to taking sexual risks. In addition, this abstract notion of space refers to contextual factors such as the coercive nature of sexual interactions between commercial sex workers (CSWs) and policemen and influence of alcohol and drugs on sexual behavioural decision-making amongst all the study populations.
Overall, the results reiterate knowledge of mobile and migrant populations being significant channels for the transmission of HIV/AIDS and STIs. The findings revealed generally sound knowledge of HIV/AIDS and the risk to health of HIV and STI infection amongst the study populations but this is ignored by substantive minorities in the stevedore and truck driver samples (and the majority in the case of CSWs) as evidenced by the relatively high incidence of STI infections, risky sexual liaisons and inconsistent condom use. The exception was the seafarer sample where the evidence pointed to sound knowledge and limited sexual risk taking due, it seems, largely to regular health checks of ships crews, access to medical services and restrictions on gaining shore leave. The findings also did not indicate education level and marital status as significant social factors influencing sexual behaviour and vulnerability but, in some instances age was a pertinent factor. However, the study could not determine statistical significance in these sub-analyses due to low sub-sample sizes. More generally, the findings affirm a long standing thesis on the epidemiology of STIs, which also applies to HIV/AIDS; namely that societal factors determine the evident high levels of HIV and STI infection and risk of infection amongst mobile and migrant populations.
Content:
Region/Country (by coverage)
Southern Africa
South Africa
Southern Africa
Publisher
IOM South Africa
Project Type
Health promotion and assistance for migrants