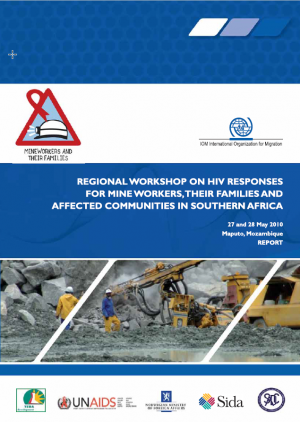 Regional Workshop on HIV Responses for Mine Workers, Their Families and Affected Communities in Southern Africa

In response to the health and HIV vulnerabilities of mine workers, their families and the communities with which they interact, IOM in partnership with Southern African Development Community (SADC) HIV/AIDS Unit, United Nations Joint Programme on HIV/AIDS Regional Support Team for Eastern and Southern Africa (UNAIDS RSTESA), and TEBA Development (Regional Office), organised a Regional Workshop on HIV Responses for Mine Workers, Their Families and Affected Communities in Southern Africa, which took place in Mozambique, Maputo, on 27 and 28 May 2010.

The countries that were included in this workshop were both mine worker-sending and mine worker-receiving (including internal and cross-border migrants):

• Mine worker-sending: Lesotho , Mozambique, and Swaziland

This workshop report is a summary of the proceedings of the workshop.