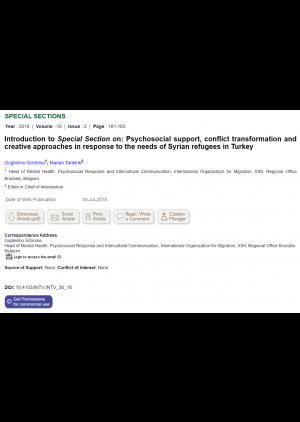 Introduction to Special Section on: Psychosocial support, conflict transformation and creative approaches in response to the needs of Syrian refugees in Turkey

IOM has been involved in psychosocial support activities for migrants, asylum seekers, refugees and crisis-affected communities since the late 1990s. The organization’s approach to its psychosocial programmes is systemic, interdisciplinary and community based. One main feature of these programmes has been the organization of executive masters, diploma or certificate courses on psychosocial approaches to population mobility in low-resource or crisis-affected countries and communities. These courses − run from the Balkan peninsula to the Middle East, to South America − have all been adapted to the specific cultural, social and political conditions in the countries, as well as the situations and political landscapes in which they were organized.

The idea of organizing courses looking at the intersections between psychosocial support and conflict transformation in the context of the Syria crisis was informed by different considerations. One was the attempt to step away from a psychosocial approach that is dominated by clinical psychology and public health paradigms, and often forgets the wider inputs that social and psychological sciences (such as community psychology, linguistics, anthropology, ethnography and applied arts) can give to humanitarian action. The aim is to shift the focus away from prevention and the cure of mental disorders to psychologically informed and culturally sensitive social action.

The course in Turkey was organized into three pillars. The first looked at psychosocial support, international standards, the Inter-Agency Standing Committee pyramid of mental health and psychosocial support intervention, counselling skills, assessment skills and systemic approaches to care. The second pillar looked more in depth into the practices of conflict mediation and transformation, pacific coexistence, dialogue and integration at the small community level. The third pillar was dedicated to the use of culture and cultural activities in both other pillars and as a way to link them. The attention to cultural, creative, theatrical and oral history processes and tools was also due to very practical reasons. Within the security situation created by the conflict, counselling and talk therapies were not often welcome by authorities and the clients reluctantly engaged or did not engage due to privacy and security considerations. The use of creative tools and, therefore, of metaphors allowed them to express the unspeakable in safe ways and approach conflict transformation without the imposed sedimentation of a language informed by dominant, polarizing narratives.