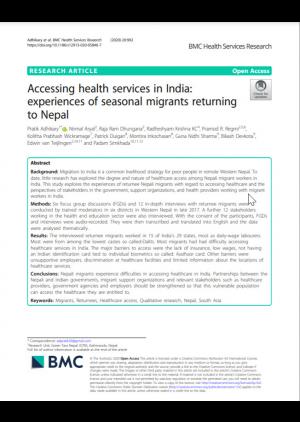 Background
Migration to India is a common livelihood strategy for poor people in remote Western Nepal. To date, little research has explored the degree and nature of healthcare access among Nepali migrant workers in India. This study explores the experiences of returnee Nepali migrants with regard to accessing healthcare and the perspectives of stakeholders in the government, support organizations, and health providers working with migrant workers in India.

Methods
Six focus group discussions (FGDs) and 12 in-depth interviews with returnee migrants were conducted by trained moderators in six districts in Western Nepal in late 2017. Another 12 key persons working in the health and education sector were also interviewed. With the consent of the participants, FGDs and interviews were audio-recorded. They were then transcribed and translated into English and the data was analysed thematically.

Results
The interviewed returnee migrants worked in 15 of India’s 29 states, most as daily wage labourers. Most were from among the lowest castes so called-Dalits. Most migrants had had difficulty accessing healthcare services in India. The major barriers to access were the lack of insurance, low wages, not having an Indian identification card tied to individual biometrics so called: Aadhaar card. Other barriers were unsupportive employers, discrimination at healthcare facilities, and limited information about the locations of healthcare services.

Conclusions
Nepali migrants experience difficulties in accessing healthcare in India. Partnerships between the Nepali and Indian governments, migrant support organizations, and relevant stakeholders such as healthcare providers, government agencies, and employers should be strengthened so that this vulnerable population can access the healthcare they are entitled to.